Why Nurses Strike and What Needs to Change

Nurses strike is very common worldwide. Many of our fundamental rights as workers, such as the eight-hour workday, weekends, and child labor laws were established thanks to unions and  nurses strikes.

Striking occurs when negotiations between unions and employers reach a standstill and employees protest by refusing to work. But striking can be risky for employees. Historically, many people who’ve gone on nurses strike have lost their jobs. Some have even died during violent clashes with police.

Nurse unions began to gain prominence in the 1940s. Like unions in other industries, they aimed to regulate the profession, raise wages, and improve working conditions.

Nurse unions have made some significant wins over the decades. But today’s nurses are still fighting to achieve their original goals and some new ones — especially in light of the pandemic.

“The things that the unions talk about each and every day, the complaints they hear from nurses at the bedside, have to do with the conditions under which they’re working, the lack of power to speak up, and the lack of autonomy to make some more meaningful decisions,” says Denise Duncan, RN, president of the United Nurses Associations of California (UNAC).

The number of U.S. workers belonging to unions across industries has been on the decline in recent years. But labor experts believe that COVID-19 may have ignited a renewed interest in union memberships, especially among healthcare workers.

Before the pandemic, it had become rare for negotiations between healthcare unions and employers to turn into nurses  strikes. But over the last two years, nurses have striked in New York, Massachusetts, California, and Oregon. Many others came close, including the UNAC in late 2021.

The issues that nurses are most concerned about vary in different parts of the country. But the following are three of the most widespread problems that nurse unions are talking about.

Inadequate nurse-to-patient ratios is one of the top concerns among nurses around the country. While COVID-19 has intensified the problem, staffing has been an issue for over a decade. When hospitals are short-staffed, nurses are expected to pick up the slack, resulting in high rates of nurse stress and burnout. According to a 2020 survey conducted on healthcare workers, nearly half of 20,000 respondents reported feeling burnt out.

“We’ve been talking about it for so long, and nobody wants to listen,” says Theresa Brown, Ph.D., BSN, RN, and contributor to The New York Times. 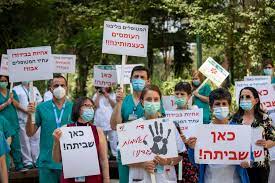 Brown became a nurse later in life and was surprised by how overworked her colleagues were. In some cases, nurses were expected to fill in for nurse aides in addition to their main duties.

Nurses say an ideal nurse-to-patient ratio would be 1:1 or 1:2. But ratios are more typically 1:3-1:5 and can reach up to 1:10 in some hospitals. Inadequate staffing and nurse burnout are the biggest causes of turnover in nursing. In November 2021, one-third of registered nurses (RNs) surveyed in the U.S. said they were considering leaving their current direct patient-care role.

But balancing nurse-to-patient ratios isn’t just important for nurses’ well-being. Studies show that inadequate nurse staffing is associated with higher rates of patient mortality. So, the shorter-staffed a hospital is, the more likely it is for deaths due to medical error to occur.

Brown compares the concept of adequate staffing to something more relatable for nonhealthcare workers: cooking dinner.

“If you’re hurrying around slicing and dicing, you’re much more likely to make a mistake than if you have a calm environment and you have enough time,” says Brown.

But a mistake made in a hospital isn’t always as harmless as burning an entrée. It can be life or death.

In spring 2022, Tennessee nurse Radonda Vaught was convicted of two felonies after one of her patients died due to a fatal drug error. The highly publicized trial has amplified conversations around inadequate staffing and preventable hospital deaths.

Hospitals often argue that they don’t have control over a lack of nurses to fill the gap. But in many states the problem may be more related to hospitals’ unwillingness to staff hospitals with enough nurses than a true shortage of workers.

For example, in Massachusetts, there was a significant increase in nurses over the pandemic. Between June 2019 and February 2022, the number of licensed RNs in the state increased by 24%. Yet, many hospitals in the area are still short-staffed.

In 2018, a public ballot to improve nurse staffing in the state was defeated due to fears that regulations could negatively affect hospital operations. Congress is reviewing a federal bill that would require hospitals to meet minimum nurse-to-patient ratios. But it has received opposition for the same reasons.

California is the only state that has successfully carried out such legislation, which was passed more than 20 years ago.

A study performed in spring 2020 found that frontline healthcare workers who had to reuse personal protective equipment (PPE) were more likely to get the coronavirus than those with sufficient access. Some of the resultant deaths could have been prevented with proper PPE.

Marie Ritacco, vice president of the Massachusetts Nurses Association (MNA), said that during the onset of the pandemic, nurses at St. Vincent Hospital in Worcester were asked to reuse masks for 6-8 shifts and to wash plastic gowns between patients. This was a common occurrence at healthcare centers across the country. In New York, nurses at Albany Medical Center reported reusing masks up to 20 times.

The MNA ended up striking for 10 months for various reasons, including lack of PPE. It was the longest nurses strike in the history of Massachusetts.

“We had nurses who would write up these heartfelt messages and try and read them to the [chief nursing officer] and the [chief executive officer], and nothing changed,” says Ritacco.

The PPE crisis may have subsided for now, but conversations around workplace hazards at hospitals were not born, nor did they die, with COVID.

Even in less turbulent times, hospital workers’ health is at higher risk than the general population — and not just because of exposure to diseases. While on the job, nurses experience:

Homicide (in the worst cases)

According to the American Nursing Association, 1 in 4 nurses are assaulted in the workplace, which is double the rate of assaults on police officers reported by the FBI.

“Those of us in healthcare feel very vulnerable,” says Duncan. “There are no metal detectors. There are open doors, and people can just walk in.”

Nurse unions have been fighting for better safety measures to prevent nursing workplace violence and reduce health risks for years. For many of them, the lack of PPE during COVID was just the last straw.

Many states have laws that prohibit healthcare centers from enforcing mandatory overtime for nurses. But even in these states, most have contingencies that allow hospitals to skirt the law during times of emergency.

For instance, New York suspended its mandatory overtime law for nurses during the pandemic without indicating when it will be reinstated. Legislation is currently underway to put a time limit on how long the state can pause these protections for nurses.

A similar situation is happening in Michigan with the proposal of the Safe Patient Care Act that includes limitations on mandatory overtime. But it hasn’t passed yet. In Nevada, the University Medical Center of Southern Nevada released a memo with plans to activate mandatory overtime in March 2022. Due to backlash, the hospital has delayed the proposal.

There are many pros to striking for nurses despite the risks that come along with it, mainly risking their jobs. But the main arguments against striking come from the hospitals’ perspective, and they are easily predictable.

Hospitals, especially private institutions, are interested in cutting costs and making money for shareholders. And most of the issues that unions bring up don’t forward this goal.

“There’s this sort of corporate mantra we’ve kept hearing over several years in clinical work of ‘let’s do more with less, more with less,’ but you can’t slice people that thin,” says Brown.

Healthcare employers like to point to a 2012 study showing that patient mortality and readmission rates can rise when nurses strike. This is because disruption of continuity of care — even when temporary nurses are brought in — can reduce quality of care.

But other research shows that mortality rates also go up when hospitals are understaffed, a fact that healthcare employers would like to ignore. And a 2020 study found that COVID mortality rates in nursing homes were actually lowest in unionized facilities.

It’s important to know that making the decision to strike as a nurse is not an easy one. It’s usually a last resort.

The MNA started negotiations with St. Vincent Hospital for 16-18 months before the beginning of the pandemic. It wasn’t until March 2021 that MNA nurses went on strike, after COVID numbers had come down from their peak.

For nurses, promoting patient care is always at the forefront. As Ritacco says, “If nurses don’t stand up and say, ‘No, it’s not good enough for our patients,’ who will do that?”